It is an exciting time for the St. Louis University Billikens and their coach, former NHLer Todd Ewen, as they are prepare to host fifteen other teams from the American Collegiate Hockey Association for the 2012-13 Division II National Championship Tournament for the first time.

With a place assured for themselves in the tournament as the host club, the stage is set for some great hockey action at the Hardee’s Ice Complex from March 15th-19th.

Founded in 1991, the American Collegiate Hockey Association (ACHA) currently consists of three men’s divisions and two women’s divisions, with 446 teams competing across the United States. Their mission is to grow the sport at the collegiate level, while providing structure and governance for the member schools.

“It is going to be great,” Todd said on the phone from St. Louis. “The way I look at, 98% of the kids in the United States will end up playing in the ACHA because there are not enough jobs in the Major Junior leagues or the NCAA for players. That’s why I fought for the Division II Championship Tournament to come here - the amount of national champions we have had out of St. Louis is absolutely staggering. I put a lot of that success on my Alumni brothers here who have worked with the Junior Blues; they have really developed some great players.”

Read my interview with Todd Ewen at the NHL Alumni website
Posted by Unknown at 8:37 AM No comments:

Regardless of your age or musical preference, there’s no doubt that you have probably heard the Beatles classic With A Little Help From My Friends. In one of his rare appearances behind the microphone, Ringo reminds us that life is a lot more fun and we can take on any challenge with our friends at our side. One of the wonderful aspects of the great game of hockey I have witnessed firsthand, thanks to my work with the NHL Alumni Association and here at The Voice of Sport, is how hockey builds friendships that last a lifetime.

﻿﻿﻿﻿﻿﻿﻿﻿ For Will Colbert and Sam Roberts, their journey and eventual friendship through hockey began almost three thousand kilometres apart; Will was born in Arnprior, Ontario, while Sam was born in St. John’s, Newfoundland. By the 2004-05 season, Will was the Captain of the Ottawa 67’s in the Ontario Hockey League and Sam was wearing the ‘C’ across the Ottawa River with the Quebec Major Junior Hockey League’s Gatineau Olympiques. While only minutes apart as captains of their respective teams, they did not know each other during that point in their careers.

Once their time in the OHL and QMJHL was over, both players made the decision to continue their education and they were off to St. Francis Xavier University (St. FX) in Nova Scotia. It was at university, enrolled in the same Human Kinetics program, where they met and became teammates for the first time.

“The coach told me before even getting there that Sam and I were going to be good buddies,” Will recalled as I interviewed the two defensemen via Skype.

“We were the only two living in residence that year, so right off the bat we were kind of forced to hang out with each other,” he said with a laugh. “It was definitely a blessing and I think we knew right away that we had similar personalities - we were in the same program and we were both first year guys sharing this new experience. Coming from Major Junior, we did not know that we had been so close to each other that whole time.”

“You look at all the guys that go on to play university hockey,” Sam said of becoming friends once they arrived at St. FX. “The majority of them are ex-Major Junior players, so you are going to have stuff in common with the guys you meet and the guys you play with in university. Not everyone decides to go to school, so you are meeting guys that have made some very similar decisions about life and their hockey careers. In our situation, it seemed we had a lot in common personality wise, and somewhere along the way, we started getting asked if we were brothers - it has actually gotten quite comical over the years!”

The two would go their separate ways after university. As a draft pick of the San Jose Sharks, Will split the 2009-10 season between their American Hockey League (AHL) affiliate in Worcester, Massachusetts and their East Coast Hockey League (ECHL) team in Kalamazoo, Michigan. After his time at St. FX, Sam split his season between the Lake Erie Monsters (AHL), Syracuse Crunch (AHL) and the Gwinnett Gladiators (ECHL). It was in Gwinnett, Georgia, that the two friends would become teammates again in 2010.

“The chance for me to get to Gwinnett initially,” Sam explained. “Was that our coach at St. FX had played for the Gladiators’ coach a number of years before, so they had a connection and he had sent players down there. Obviously, being in the South and playing hockey, I loved it! Over the year, I would tell Will he had to get down there. We would joke about it and after our first year of pro, towards the end of that summer, it started to look like it would actually happen.”

“We were both looking to find different opportunities in the AHL,” Will continued. “Over that summer after our first year, nothing was coming along for me. Obviously, I trust what Sam says about a team, a coach, an organization and a city, so to go there instead of somewhere else, where I wouldn’t know what to expect was a no-brainer for me.”

Which brings us to this season and their current team, the Belfast Giants of the Elite Ice Hockey League (EIHL). With the work stoppage in the NHL at the start of the 2012-13 season, most teams in the AHL and ECHL were expecting an influx of players sent down from the NHL. There was great uncertainty too, as to how long the lockout would last, which provided Sam and Will with the opportunity to explore all of their options. The hockey world is a small world, so once again, connections and friendships from their past teams ultimately brought the two Canadian defensemen to Northern Ireland.

“We were both kind of looking around at the different opportunities,” Will said. “This league tends to be a little more like the North American style of play, but on a bigger ice surface, so it is less of an adjustment. We had a few buddies from Gwinnett that are in this league now, so we were able to talk with them about it. We heard that Belfast was a great place to play.”

“I spoke to Jason Walters,” he continued. “Jason grew up in Renfrew (*near Will’s hometown of Arnprior) and I was hanging out with him in the summer. He knows our coach here, Doug Christiansen, and was able to connect me with Doug. We talked a bit and it seemed like this would be a really good fit for me. At the same time, Sammy didn’t have anything yet. When we learned there was a chance we could both be here, it made the option more attractive.” 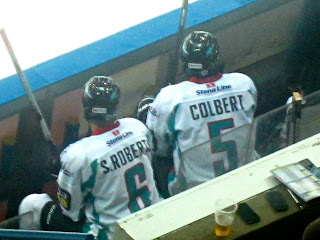 With a 24-7-5 record and 59 points after 39 games, the Giants are within striking range of the first place Nottingham Panthers and their 61 points. The Giants have tremendous support from their fans and they are quite knowledgeable about the game too, which has allowed Will and Sam to feel right at home with their new team in Belfast.

“I always joke with people over here,” Sam said. “They say, ‘Oh, you’re from Canada but you are over here playing ice hockey?’ which does seem kind of backwards, but there is quite a following here and the facilities are great - very, very professional!”

“We are looked after really well and have great crowds at our games,” he continued. “It’s kind of funny, it doesn’t seem like you are in a place that is known for European football and rugby when you see how they get behind the hockey. And for me, a lot of the accents here aren’t that different from the ones I encounter when I’m back home in Newfoundland. So, I’m kind of like the unofficial translator here when we try to get a cab somewhere.”

“There are a lot of hockey fans here and the ones that like it are real die-hard fans,” Will added. “The travel is good too. The ferry to Scotland is about two hours when we go to play the Scottish teams and we fly over to play the teams in England. We have been able to see parts of Scotland, Wales and England, which is nice. We were also over to Germany too for the Continental Cup and that was a really neat experience.”

“Belfast is a great city,” he said of their new home-away-from-home. “We have had a lot of fun here so far. We are pretty much right downtown and we can walk anywhere we want. It has been a good experience and hasn’t been a culture shock - and the Guinness tastes better here than it does at home.”

Many North American hockey fans that are unfamiliar with the EIHL might be surprised by the level and style of play in the league. A larger ice surface allows for more room to manoeuvre, but with many North Americans in the league, there is a familiar element to the game - with more physicality than you would see in other European leagues.

“That is one of the neat things too about playing here this year,” Sam said. “It’s the quality of the guys from around here. Just to think what hockey is back home, you might not expect to see the level of play that you see over here. A lot of the guys, whether they are local, Scottish, or from the London area, they are really, really good players! I think it is fairly underrated in terms of European hockey. It doesn’t get the credit it deserves, but it is only a matter of time before it does because the quality of play is above and beyond what you might expect coming from North America.”
In the world of professional hockey, it is difficult to know when, or how long you will be teammates with someone; trades and free agency opportunities arise - sometimes when you least expect it. However, friendships that last a lifetime extend beyond the rink, beyond the uniform. There is no doubt in my mind that we will be seeing this dynamic duo, these hockey brothers, having fun for years to come.

Good luck the rest of the way Will and Sam - Thanks for the chat and we’ll see you when you are back home at season’s end! 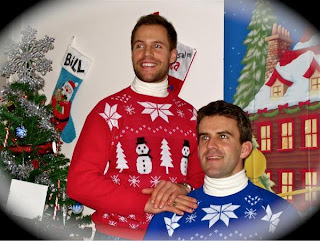 You can follow Will and Sam on Twitter (@willycolbert and @SammyNL) and you will see their friendship in action (the Christmas sweater picture being a great example!).

Posted by Unknown at 2:00 PM No comments:

Email ThisBlogThis!Share to TwitterShare to FacebookShare to Pinterest
Labels: Sam Roberts, Will Colbert

Bill helped countless individuals in the Ottawa area and beyond as an active member of the 67’s and Ottawa Senators Alumni, as well as through his involvement with Tim Horton’s as a franchise owner. To honour his memory and work in the community, Bill’s former OHL team recently announced that his legacy of helping others would live on with the creation of a new annual award - the Bill Kitchen Community Builder Award.

Interviews from the Nation's Capital: